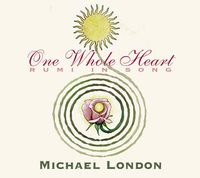 Love Songs From Rumi & Other Places

Michael London is a Philadelphia Area musician with a soulful voice and a great touch on acoustic and electric guitars. London is also a passionate interpreter of Rumi’s poetry, the great 13th century Sufi poet. He offers us a musical window into the ecstatic poems, which reveal and make tangible our connection with the self, humanity, nature and beyond. His CD's and original songs, inspired by this mystical poet speak directly to us, and get to the central themes and issues of living with passion and true joy. His musical journey began with singing folk songs and show tunes with his family and he found it brought warmth, connectedness and bonding like nothing else. He was especially inspired singing songs by James Taylor, Cat Stevens, Richie Havens and Marvin Gaye and began to write songs and to develop his own musical voice. An accomplished songwriter, Michael is adept at many guitar styles, has his own recording studio and is a soulful and moving singer. He is also a college Professor by day, and has a PhD in Organizational Behavior and serves on the faculty at Muhlenberg college. Today, his many influences come together in his heartfelt explorations of “Rumi In Song”. He also performs with Cabin 23, an Americana jam band and the Spiritual Window Shoppers an, eclectic folk ensemble.

"I heard Michael's music for the first time on WXPN (Gene Shay's show) and was blown away by the ways in which he wove the exquisite poetry of Rumi with his own inspired musical creations. Hearing him in concert less than a week later, the intensity of the passion and magic increased 100-fold. Sitting in the audience, surrounded by souls listening with rapt attention, I was moved with a certainty that the poet himself was whispering in Michael's ear throughout the performance. At turns, deeply peaceful and vibrantly energetic. What a gift!" - Edie Weinstein Moser LSW

Jim Hamilton has been deeply involved with music for his entire life. His work as a drummer and percussionist has taken him all over the world including performances at the Grammys, World Music Awards, MTV , BET and VH-1 Video Music Awards. Along with appearances on David Letterman and Jay Leno. During the 1990’s, he toured with suchlegendary acts as Boyz II Men and Gerald Alston. After returning home to Philadelphia, he opened his own recording studio, which he operated for over fifteen years. During this time he toured Japan and Europe extensively with Ursula Rutker. On top of running his studio, he also became heavily involved in the Percussion scene in Philadelphia. He was a co-founding member of” Spoken Hand” and Alo Brasil. During his carrer he has recorded with a wide variety of artists including: John Blake, Oden Pope, Zakir Hussain, Dom Um Romao, Marshall Allen, Lee Smith, and Warren Smith. As a live performer he as shared the stage with Toni Braxton, Paul Winter, Jamaladeen Tacuma and Calvin Weston. Among others.

Paul embraces numerous styles, including Jazz, Dixieland, Chamber music, and Klezmer. He holds a Bachelor of Music Education from Mansfield University. He served as US government-sponsored cultural ambassador to the middle east, bringing jazz to multiple countries, including Syria, Morocco, and Tunisia.  Paul has over 20 years of teaching experience, as well as extensive performance experience, including performances with Grammy-nominated cellist David Darling.

Larry Cohen's ability as a monster bass player, musical arranger and record producer first earned him public recognition through his work with the highly innovative bluegrass band Tony Trischka and Skyline.   During his Skyline tenure, Larry toured extensively throughout North America, Europe and Japan and accompanied many top musicians including Alison Krauss, Bela Fleck, Darol Anger, Mike Marshall, Jerry Douglas, Mark O’Connor, Peter Rowan, David Bromberg, Vassar Clements and Nanci Griffith. He has since produced albums for Barry Mitterhoff, Jay Ansill, Akira Satake and Mark Cosgrove and enjoys a busy performing and teaching schedule.   A joy to watch on stage as well as to listen to, Larry's approach is informed by his comprehensive background in classical, jazz and rock music as well as by his innate musicality.   Lisa DeVuono   Lisa DeVuono is a poet and workshop facilitator living in the Philadelphia area. She was the co-founder of IT AIN’T PRETTY, a women’s writing collective that performed in a variety of places including bookstores, cafes, radio and prison. For ten years she worked as coach and mentor-trainer in the Artist Conference Network, a nationwide coaching community for artists doing creative work.  She has facilitated creativity and poetry workshops at conferences, festivals, retreats, hospitals and business settings. Additional work has been with teenagers in recovery, cancer patients, and ALS patients and their families. She has also written a peer-based poetry curriculum for facilitating workshops with individuals living with mental health challenges.  Her poetry has been published in several literary reviews, and her chapbook, is entitled “Poems from the Playground of Risk.”  She also performs poems based on the poetry of Rumi, with musician and songwriter Michael London.