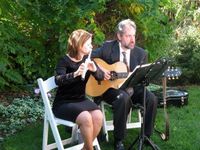 Michael London is a Philadelphia Area musician with a soulful voice and a great touch on acoustic and electric guitars.  His latest recordings feature interpretations of classic folk, jazz and soul songs in his own unique, exciting and expansive style.  London is also a passionate interpreter of Rumi’s poetry, the great 13th century Sufi poet.  He offers us a musical window into the ecstatic poems, which reveal and make tangible our connection with the self, humanity, nature and beyond.  His CD's and original songs, inspired by this mystical poet speak directly to us, and get to the central themes and issues of living with passion and true joy.  His musical journey began with singing folk songs and show tunes with his family and he found it brought warmth, connectedness and bonding like nothing else.  He was especially inspired singing songs by James Taylor, Cat Stevens, Richie Havens and Marvin Gaye and began to write songs and to develop his own musical voice.  In college, he found a whole new world of incredible players and shifted his focus to instrumental work, learning to improvise and accompany dancers with atmospheric and lyrical guitar.  An accomplished songwriter, Michael is adept at many guitar styles, has his own recording studio and is a soulful and moving singer.  He is also a college Professor by day, and has a PhD in Organizational Behavior and serves on the faculty at Muhlenberg college.  Michael has a great ability to get audiences involved and takes the stage with comfort and poise. Today, his many influences come together in his heartfelt explorations of “Rumi In Song”.  He also performs with Cabin 23, an americana jam band and the Spiritual Window Shoppers an eclectic folk ensemble.

"I heard Michael's music for the first time on WXPN (Gene Shay's show) and was blown away by the ways in which he wove the exquisite poetry of Rumi with his own inspired musical creations. Hearing him in concert less than a week later, the intensity of the passion and magic increased 100-fold. Sitting in the audience, surrounded by souls listening with rapt attention, I was moved with a certainty that the poet himself was whispering in Michael's ear throughout the performance. At turns, deeply peaceful and vibrantly energetic. What a gift!"   - Edie Weinstein Moser LSW

Listen to Michael's interpretation of Rumi in Song

"Love Is A Madman"